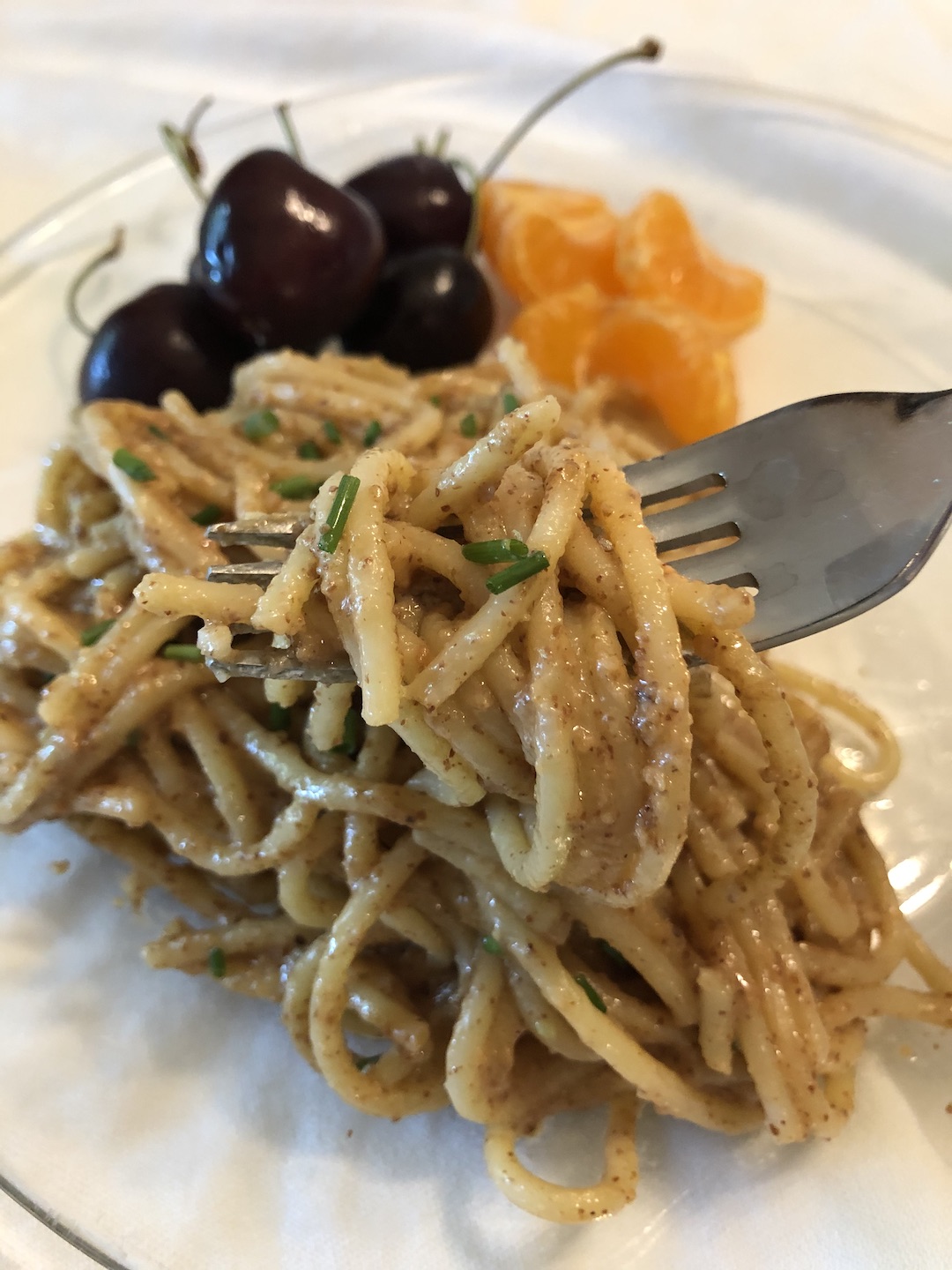 Here is the transcript of the episode:

Most episodes, I will share favorite recipes as well as modification tips, and nutrition benefits. Occasionally I’ll have a guest or special episode like modifying holiday favorites.

Peanut butter pasta, almond butter noodles, vegan Szechuan noodles, no matter what you call it, this is an addictive Asian noodle recipe with seed or nut butter as the star of the show. This is a versatile, easy-to-modify vegan main dish. Even if you’re not vegan yourself, a plant-based meal is easy on your heart and your budget. Plus, it’s always good to have a meal to share with a vegan friend. It’s quick and easy, made with pantry staples, except for the chives. They grow in my garden for eight months of the year.

In the time it takes to cook the pasta, the quick no-cook sauce comes together. When the pasta’s done just stir everything together and serve. It’s easily made gluten-free by using gluten-free pasta. My son is allergic to peanuts so for him, we make the almond butter version. When he’s away at college, my daughter prefers the peanut version. I’ve not yet made it with seed butter, like Wow Butter or sunflower butter as we have sensitivities to soy and sunflower in my house, but it should work just fine.

Now I will tell you that using a different seed or nut butter, you may need to modify the seasoning slightly. I found that the almond butter version requires less water, for example, than when using peanut butter. My favorite version of this recipe is the almond butter version as I think it serves as a more subtle background for the other flavors. The peanut version features the peanut flavor more prominently. I would love to hear what your favorite version is.

Now, let’s talk just a moment about ingredients. So there’s nut butter in it. There’s either soy sauce or coconut aminos in it. There’s some rice wine vinegar. You could also use a very mild other vinegar, but this is a really mild vinegar. A little bit of sweetener, so a little bit of either sugar – and just a teaspoon, you could do without – or maple syrup. There’s garlic in it. There’s chives, or you could use scallions if they’re more available. Okay. There’s some toasted sesame oil to give it a rich complexity and flavor. If you’re sensitive to that, you can leave it out.

Now let’s talk about some of these substitutions. Oh, and I almost forgot a little bit of hot pepper flakes, which you can vary according to how many hot pepper flakes you like. So I already mentioned, we substitute almond butter for peanut butter about half the time in this recipe. You could use any other nut butter. I bet cashew butter would be awesome. I’ve not used a seed butter as I mentioned, but they should work just as well.

Now instead of soy sauce, I make this with coconut aminos most of the time, but you could use a low sodium soy sauce. For noodles, any pasta will do. I’ve made it with a variety of shapes and kinds. The traditional is a longer noodle and often people use rice noodles, but any kind of pasta works great.

Variations on this recipe include adding raw or cooked vegetables, like colored peppers or broccoli, or even protein like tofu or chicken. I prefer to have my veggies on the side, but if I were going to add veggies or protein to this, I would consider increasing the sauce by about 50%. My daughter often uses lentil pasta to increase the protein and the fiber in this dish. And she occasionally stirs in canned chicken and stir fried broccoli, which is obviously not vegan, but it would be a great makes a great one dish meal for her.

So for preparation tips, you can just stir all the sauce ingredients together. But I find this method easiest. I add the sesame oil to the nut butter first because I’m adding oil to a high-fat product already. Then I add the soy sauce stirring very well after it, or the coconut aminos, whatever you’re using, and the rice vinegar, stirring well after each addition, and then add the sugar, the maple syrup.

And at this point, the water and the vinegar and the soy sauce may have caused the sauce to kind of become less creamy and much stiffer, often darker in color. Don’t worry. You’re going to add some very hot tap water about a tablespoon at a time, stirring well after each addition. Stop when the sauce is creamy, but not runny, it will thin a little from the moisture on the noodles. Then you add your garlic, your chives, and your red pepper flakes. Add the cooked pasta into the sauce and serve warm or room temperature.

Almond or peanut butter pasta stores well in the refrigerator, but the sauce tends to soak into the noodles so it makes the dish dry. To restore its creaminess, add about a tablespoon of water for about half the recipe and heat it in the microwave. Stir it thoroughly. If it’s not creamy, add another tablespoon of hot water, but add the water carefully and sparingly, or the sauce will end up in the bottom of the bowl and not cling to your noodles.

If you’re using peanut butter, it’s a great source of zinc – 25% of the zinc women need in a day. And about 18% of the zinc for men. I mentioned the nutrients vary the most in this recipe for sodium and calcium, but you can also vary the amount of sodium if you used an unsalted peanut or almond butter. The almond butter version only has about 120 milligrams of sodium and about double that for the peanut butter version, just using a regular off the shelf, peanut butter, not a low sodium one.

This is a fun recipe that you can dress up or dress down. Like I said, add vegetables to it. Add protein like tofu to it. It’s a wonderful quick pantry meal. When you need something quick, we like to eat it for lunch. I think I could eat it for lunch every day for a week before I got tired of it.

Remember the entire recipe is at foodsensitivitykitchen.com, episode 016, with ingredients and amounts and pictures. If you have any questions, please email me at Cindy at food sensitivity, kitchen.com. And I would love to hear what modifications you’ve made to this recipe and how your family enjoyed it. Keep Cooking to Enable Those You Love to Flourish.

Have a great day. Bye bye.