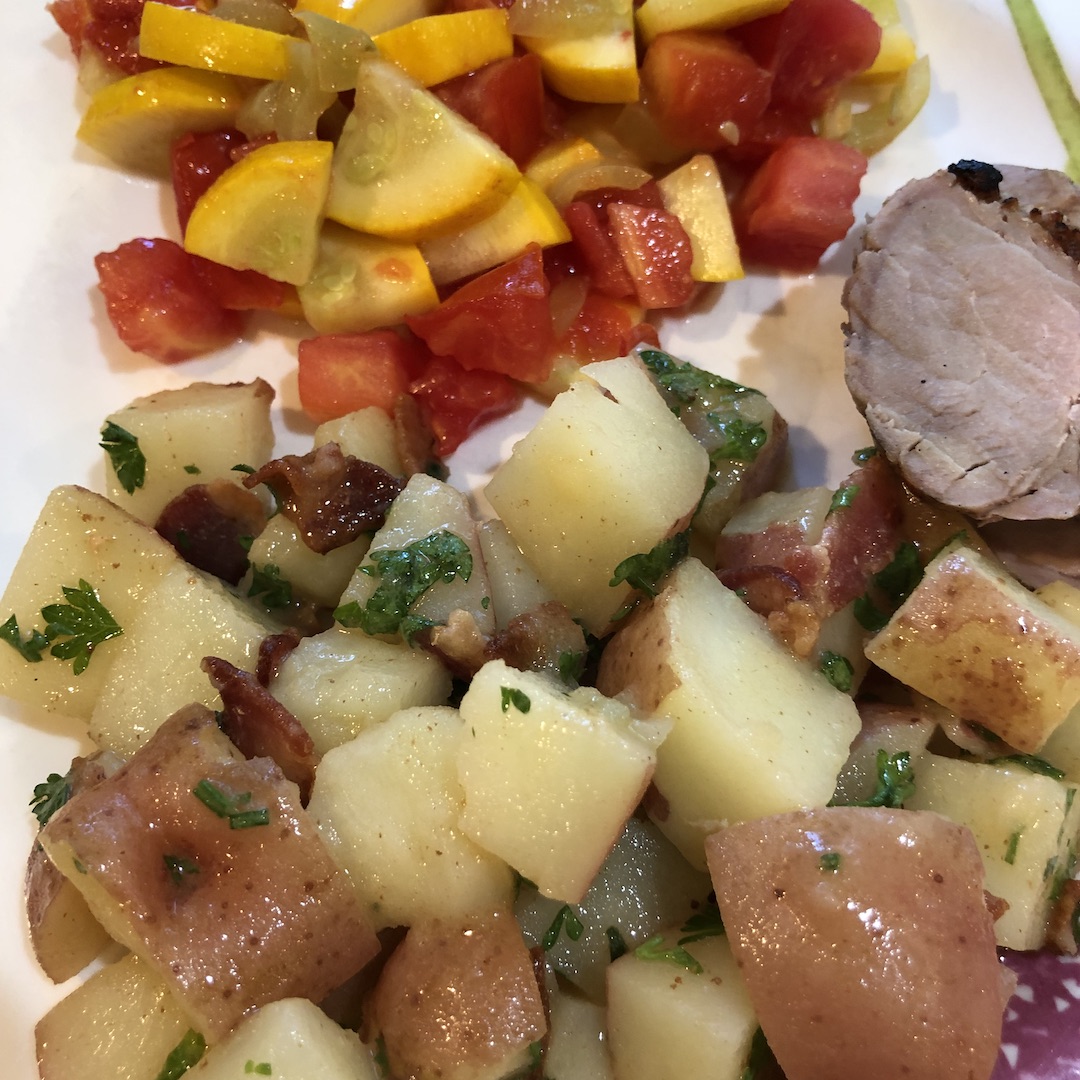 I’m Cindy Sullivan, registered dietitian, passionate nutrition educator, and accomplished home cook. Whether you’re changing how you cook for food sensitivities, allergies, intolerances, or just trying to eat healthier on a budget, you’re in the right place. Most episodes, I will share favorite recipes as well as modification tips, and nutrition benefits. Occasionally I’ll have a guest or special episode like modifying holiday favorites.

We just got back to Michigan. It’s April and it is snowing! It happens sometimes in Michigan, in April. We love it anyway, but the rhubarb is covered with snow outside. So I’ll wait a little while to pick that.

Last week I was cooking in someone else’s kitchen. My recipes were far away. The kitchen was well-equipped, but some of my staples were missing. One of our meals needed something to go with the roast pork tenderloin.

There were potatoes and bacon in the refrigerator. Awesome. With just a few pantry staples, we can make the hot potato salad that’s made in Bavaria. Now mayo-based potato salads, they’re made in Northern Germany and in the U S so this is a vinegar based dressing with lots of bacon for flavor. It’s what most Americans think of as German potato salad.

This is an allergen-free potato salad, no eggs, no dairy, no gluten, no soy, no nuts. Just delicious-ness. It takes a few minutes to chop the potatoes and bacon and saute it. But it’s really a simple dish to make.

Let’s talk a little bit about these ingredients. Now, as you might guess, potatoes are key. You need to use a waxy potato that will hold its shape when boiled. Do not use russet potatoes in this recipe, they’re too dry and will crumble and not hold their shape. Red potatoes work wonderfully. So do varieties like Yukon gold.

I don’t peel my potatoes for a couple of reasons. First of all, you have less food waste, less time required, (especially for using small potatoes – It takes a lot of time to peel all those potatoes) and just a bit more fiber.

You can use smaller potatoes in the bag since you won’t be peeling them. Plus they may have thinner skins. Just scrub them well and chop them into bite size pieces.

The second ingredient you need is bacon. You only need four slices for two pounds of potatoes. So you have plenty of leftover for cabbage soup. For example, refer back to episode 11, zero one one. Or breakfast, or just chop and freeze the extra for another day.

In the dressing you use vinegar, I use white vinegar or cider vinegar. You want the vinegar to be strong. Mustard is also in the dressing. I used a Dijon from Trader Joe’s, but another Dijon or even a stone ground one works really well. I don’t recommend yellow mustard as it has a different flavor profile.

Parsley adds flavor and nutrients to this recipe. We’re going to talk about those in a minute, but as a preview, vitamin A in the precursor form, beta carotene, vitamin C, vitamin K, the B vitamin folate. Then you’re going to add a little bit of salt and pepper to taste and that’s It.

So how do you do this? You scrub your potatoes well, especially if you’re not peeling them. Cut them into bite size pieces, about three quarters of an inch to one inch on a side, place the potatoes in a large sauce pan and cover with about an inch of water. And use cold water. That way, when the water comes to a boil, the potatoes are getting warm at the same time.

Chop the bacon into half inch wide slices and saute it in a frying pan or a sauce pan. I actually use my four quart All-Clad soup pot because it’s easier to whisk the dressing together than if I cook the bacon in a skillet.

Last week, I used a nonstick skillet. I generally don’t use non-stick because I want the brown bits called fond to develop flavor, to add to the dressing. By the time you add vinegar to the pan and scrape up the fond, the pan is easy to clean.

For the dressing. I use a one cup liquid measuring cup, and I pour in the vinegar. And if you have a whisk, then you can just put the rest of the ingredients in there. The Dijon mustard,the little bit of sugar, the salt, and put it in there and just whisk it to dissolve.

Now, if you’re not using a whisk, if you’re just using a spoon or a fork, the mustard sometimes clumps together. So my recommendation would be put the mustard, tablespoon of mustard in a bowl. Add about a teaspoon of vinegar, stir it up, add another teaspoon or two, stir it up until the mustard is dilute and liquidy enough to just dissolve in the vinegar. Okay?

Add the vinegar mixture. Now be careful of splashing here because that fat is really hot. You can let it cool for a couple minutes if you’d rather. Add the vinegar mixture, scrape to loosen the brown bits on the bottom of the pan, they’re going to add flavor to the dressing. If the fond, remember that brown part is called fond if it won’t loosen, heat the pan gently for a few minutes and then scrape the pan.

When the potatoes come to a boil, cook them about seven minutes until a fork easily pierces the potatoes. It may take you a couple of minutes longer, depending how big you made your potato pieces. I like to taste a bit of my potato to make sure they’re done in the middle.

Serve the potato salad while warm and just before serving stir in the bacon and the parsley. The salad keeps well in the refrigerator. Reheat the leftovers, or eat them cold.

This is a fairly low fat recipe because the only fat in this recipe comes from the bacon. Sodium. it’s about 10% of the sodium you get in a day, and that’s including the quarter teaspoon of salt that I’ve added to the dressing. You could easily leave that out if you’re trying to cook more low sodium.

About 25% of the vitamin C you need in a day, which comes from both the potatoes and the parsley. And about two milligramsof iron. It’s a fairly nutrient dense recipe.

Now I want to highlight parsley today. Parsley, is particularly a rich source of vitamin K. A single tablespoon of freshly chopped parsley provides more than 70% of the recommended daily intake. That’s huge. In addition, parsley, as I mentioned, is a decent source of vitamin A and vitamin C andother antioxidants known as flavonoids.

Parsley contains a large amount of the flavone apigenin and when it’s cooked or drying, it doesn’t matter. Apigenin actually concentrates in the dried parsley. So if instead of fresh, you have parsley flakes on your shelf, it will still give you this flavonoid. Okay. Flavonoids are pigments in certain flowering plants and they’re powerful antioxidants. Okay? And this one, apigenin has demonstrated particular potential as an anti-cancer agent. They’re still working on more research, of course, but it shows promise in that area.

That’s awesome. Just by sprinkling more parsley on whatever you’re eating. Plus it’s delicious. If you chop too much parsley, don’t worry. Sprinkle it on your salad. My favorite recently is to use it in scrambled eggs.

For tips on chopping parsley, go back to episode zero, zero three, the Quick White Beans, Tomatoes, Parmesan, and Parsley, both in the blog posts. There are lots of pictures there, as well as some instructions I have in that episode.

Sometimes you need a quick side, whether at home or on the road with just a few ingredients, this one takes a few minutes to chop because there are several things to chop, but after that, it’s a pretty easy, delicious recipe that’s actually good for you. SHHH – Don’t tell anyone.