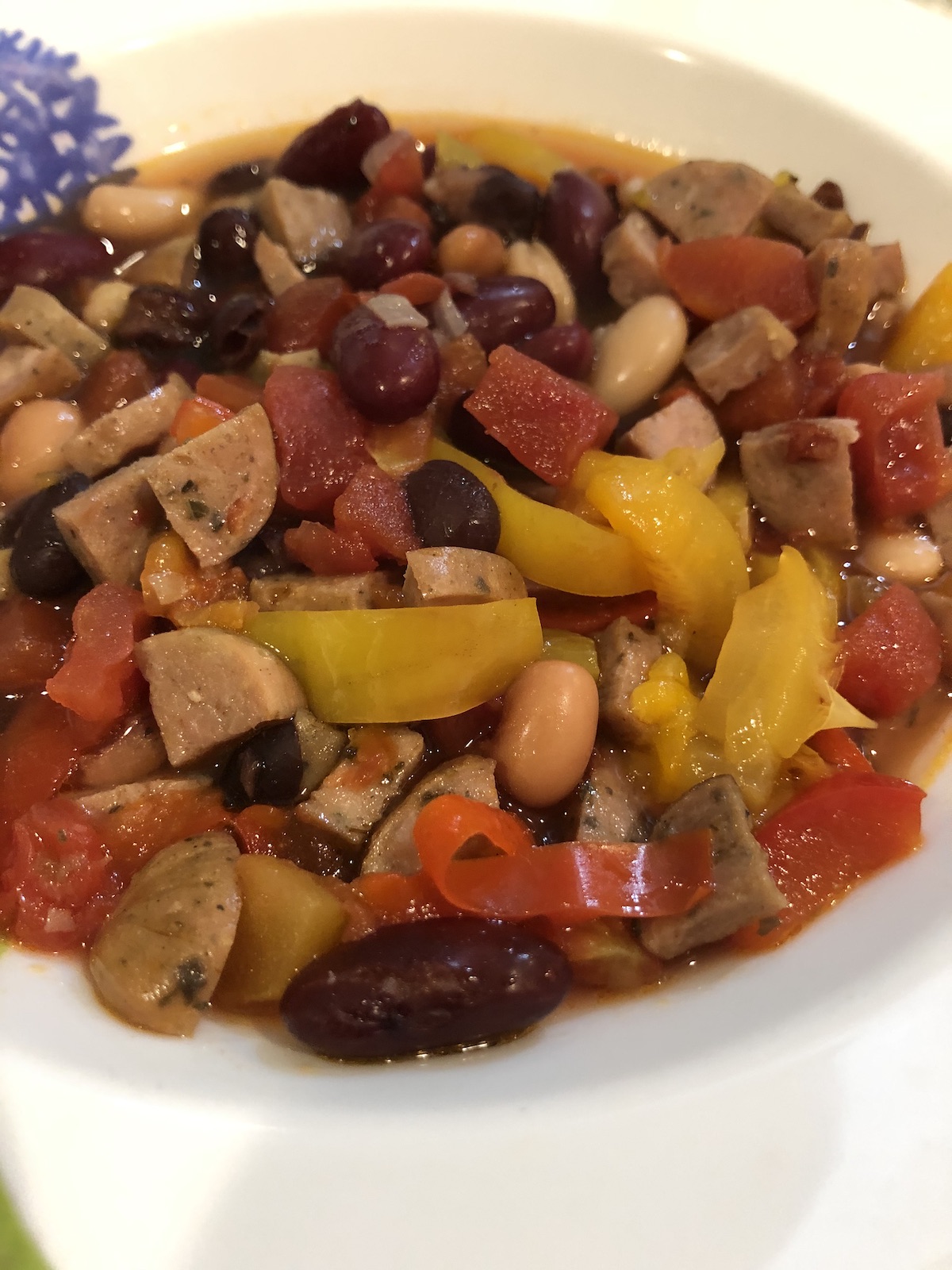 Welcome to the Sensitive Kitchen. Where home cooks are inspired to Cook To Enable Those You Love To Flourish. I’m Cindy Sullivan, registered dietitian, passionate nutrition educator and accomplished home cook. Whether you’re changing how you cook for food sensitivities, allergies, intolerances, or just trying to eat healthier on a budget, you’re in the right place.

Most episodes, I will share favorite recipes as well as modification tips and nutrition benefits. Occasionally I’ll have a guest or special episode like modifying holiday favorites.

Welcome to The Sensitive Kitchen. I hope you’re having a wonderful fall cooking with all the fresh produce that’s in harvest season right now, whether it’s apples or squash. And today I want to bring you a slow cooker meal filled with lean protein, fiber, sweet peppers, and lots of color.

But I want to start with a nutrition tidbit about how would you eat is affecting your risk of COVID and particularly the risk of severe COVID. Now those of you who have been my students at Oakland Community College,where I teach, or actually anywhere, my students, you know, that I really believe that eating more fruits and vegetables is one of the best things you can do for your diet.

For so many reasons, I really believe all of us need to increase our fruit and vegetable intake. Well, it turns out when it comes to COVID immunity more plant-based foods is the way to go.

I know you’re tired of hearing about it, but this study just came out and it just gives me another reason to encourage you to eat more fruits and vegetables. I read an interesting summary of the study done on COVID immunity and diet. It was almost 600,000 people, and they participated in a survey, a smartphone survey, but it was done before vaccines were available.

If you take the group that consumed the most plant food, the top quarter, they were slightly less likely to contract COVID only 9% less likely so slightly. And they controlled for things like mask wearing and all that stuff. But when they were sick with COVID, they were 41% less likely to develop severe COVID requiring hospitalization or oxygen.

That’s huge!! 41% less likely to be hospitalized with COVID. Eat your fruits and vegetables folks!

Of course, there are many variables in developing severe COVID take all precautions. Don’t just rely on your diet, but more plant foods give you an edge and we all can use all the help we can get. Besides being good for your body in so many other ways.

So let’s talk about this slow cooker bean sausage stew filled with peppers, legumes, and low fat protein, which is also good for your immune system.

The other thing is, unless you’re feeding a crowd for dinner, it makes enough for a freezer meal or two as well as the meal, you eat tonight for dinner. And it is loaded with fiber. It’s an excellent source of protein.

So let’s talk about ingredients we’re using in this recipe.

Chicken or turkey sausages, just because there’s so much leaner than regular sausages. And there are such interesting varieties available. Recently, we ate one with feta and fig. Ooh, it was really good. I didn’t use it in this recipe, but we ate it with some tomatoes, onions and peppers, which we talked about a couple of episodes ago. So chicken or turkey sausages

Canned beans – I use four cans of beans. So one red, one white, one black and a pinto bean. You can always substitute a can of beans for another kind, but just so there’s lots of variety and colors.

A large can of diced tomatoes. And if you have somebody in your house whoobjects to diced tomatoes, be sure you get the petite kind because they blend in much more easily.

Onions or shallots and garlic for flavor and

Now, if we’re going to talk about substitutions for allergies or sensitivities, none of the nine major food allergens are included in this dish, unless it’s in your chicken or turkey sausage. So be sure you’re reading the label.

Like I mentioned, just a minute ago, we had a chicken sausage recently that had feta cheese and figs in it. Well that wouldn’t be good for somebody avoiding dairy, right? But most of them don’t have any dairy in them. So read your labels and that’s going to be the source of your problems for most people.

And let’s keep talking about this sausage for a moment because the sausage you choose will affect both the flavor of this dish, as well as the fat, the calories and the sodium. Chicken sausage varies a great deal in taste. Find one you like and use it in this dish or even Turkey sausage. If you don’t like the taste of the sausage, you’re not going to like the taste of this dish because it is the main flavor in this dish. It’s prominent both in terms of spices and just plain old flavor.

It’s also important in terms of nutrition. So for example, the chicken sausages I use the last couple of times I made this recipe, I took pictures of the labels. For a hundred grams of sausage (now realize that’s usually more than one link for some of them) It was about one link and some of them was almost two links. Okay. But to do my comparisons, I used a hundred grams of sausage, about three and a half ounces. And the fat range from 4.3 grams to 9.8 grams. So four grams to 10 grams of fat and the sodium ranged from 614 milligrams to 1,055 milligrams.

So both fat and sodium differed a lot, depending on the kind of sausage you chose. Let’s talk about sodium for a moment, because this is not an especially low sodium dish. Now by rinsing your canned legumes. And by using low sodium diced tomatoes, you can decrease the sodium in this dish. Serve it with lower sodium side dishes or lower sodium meals the rest of the day.And you should be just fine.

I always like to tell you what the most time consuming part of this recipe is. And in this recipe, it’s cutting the sausages and peppers. I enjoy having a piece of sausage and bean and pepper in most bites, but if you really want to reduce your time, you probably could cut your peppers and sausages into chunks rather than smaller pieces. It would however, alter the cooking time. So you’d have to experiment here and you might have some people who are more likely to pick them out if they’re in big chunks.

Now, in terms of preparation and cooking time, it really depends whether or not your slow cooker insert can go on your stove. You’re going to need a big slow cooker here. So five or six quarts.

And my big six quart one actually goes right on my stove so I can put the onions or shallots and the garlic right in there, saute them and begin to heat everything else up. And it reduces the amount of time that they need to stay in the slow cooker because of already heated up. So again, the cooking time is going to depend and your preparation is going to depend a little bit too.

Let’s assume to start with that you have a slow cooker that goes on your stove, and then we’ll go over the other preparation.

So if you can put your slow cooker, it’s an insert that goes right on your stove. Remember either way to do your garlic first. You want the garlic to sit for about 10 minutes to develop allicin, which is a health compound that has wonderful health benefits. If you want to know more about that, go back and listen to episode 003, which is Quick White Beans, Tomatoes, Parmesan, and Parsley. Okay. Give you more information on allicin.

If your slow cooker goes on the stove, then chop your onions, saute them in the oil, just a little bit of oil. And when they turn translucent, put in the garlic and saute the garlic as well for about 30 seconds or so after you add the garlic.

Then add the sausage to the pan. As the sausage cooks, (And you’re really just heating it up. It’s already fully cooked.) chop your peppers. And really when I say chop, I mean slice. Slice them in half, core them out, slice them. Then either in – depending how large your peppers are- into thirds, each half into thirds, approximately and slice into thin slices the short way.

You may, if this takes a while because you’ve got a lot of peppers to slice, you may want to put the beans, drain the beans and rinse the beans, put the beans in the slow-cooker to start them heating up. Open your 29 ounce can of tomatoes put that in. Don’t drain the tomato. You want the liquid from the tomatoes in there and started heating up as you’re doing all the peppers.

Now, if your slow cooker insert does not go into the stove top, you have it in some ways, a little bit easier, but it’ll take a little bit longer because it’ll have to come up to temperature, right?

So basically you’re going to saute (You’re still going to prepare your garlic first.) You’re going to chop your onion, saute your onion until it’s translucent. Put the garlic in, saute it for about 30 minutes (seconds – not minutes as I stated! OOPS) in a small frying pan.

It’s delicious. It’s easy. It’s loaded with fiber. It’s got half of your fiber for the day – about 18 grams of fiber in a 12th of this recipe, which is huge; 24 grams of protein. You can take it for lunches. I love to have some in my freezer all the time to take out whenever. It was always one of my kids’ favorites. So they loved it when I would take it out for them, for lunches or even for dinner.

I’d love to hear what you think about this dish. What you like about it? What you swapped out? How did it turn out for your family? What did they think?

If you have not yet, please hit subscribe and leave a review for the podcast. Also would you share this podcast with a friend? I’d really appreciate it.