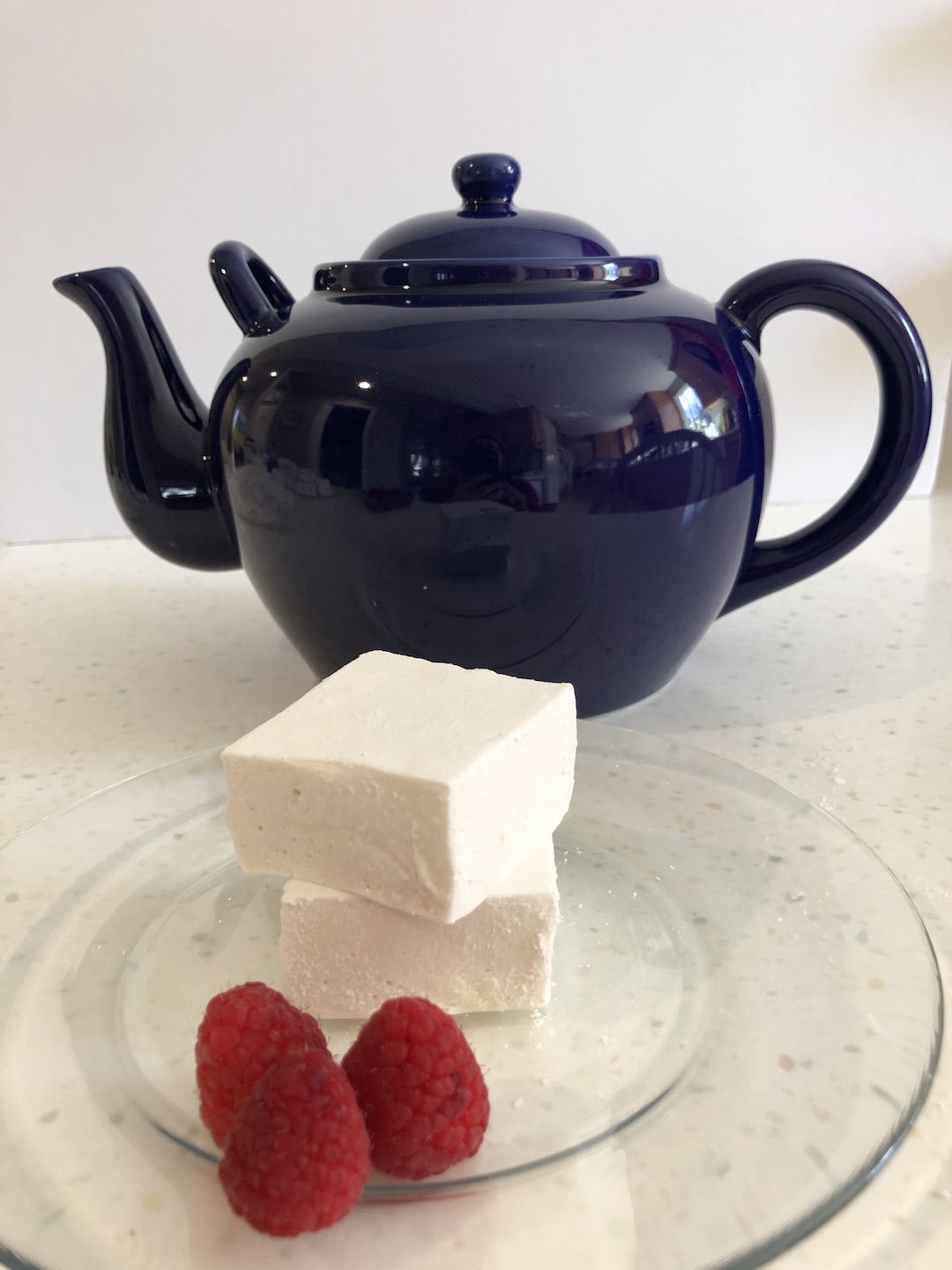 I’m Cindy Sullivan, registered dietitian, passionate nutrition educator, and accomplished home cook. Whether you’re changing how you cook for food sensitivities, allergies, intolerances, or just trying to eat healthier on a budget, you’re in the right place. Most episodes, I will share favorite recipes as well as modification tips, and nutrition benefits. Occasionally I’ll have a guest or special episode like modifying holiday favorites.

Have you ever considered making marshmallows? I never had until two things spurred me on several years ago. One was the outrageous price of artisan, they called them “homemade” marshmallows at Williams-Sonoma.

I gave it a try and I was hooked. Yum! Let me be clear. Marshmallows are not good for you. They are a treat with almost all their calories coming from sugar. But if you’re going to have a treat, this is a delicious one!

You do need some equipment to make marshmallows. First of all, you need a thermometer. I just use my instant read thermometer and a pair of heat resistant silicone mitts. Since my candy thermometer has not been calibrated in – I don’t know more than 30 years – but it works really well.

A stand mixer. I have heard you can use a hand mixer to make marshmallows, but when I watch how much steam comes off the marshmallows as they’re being mixed, I would wear tall oven mitts if you’re using a hand mixer and long thicksleeves. Steam burns are no joke.

You need parchment paper and something to grease the pan, a deep, heavy pot, a pizza wheel cutter. The hardest part of this recipe is cutting the marshmallows into pieces. I found that a pizza wheel to work the best. However, you still need to rinse it periodically. I often spray it with cooking spray to facilitate cutting.

Now, the ingredients in marshmallows are unflavored unsweetened gelatin. I use two packets in mine instead of the original three that the recipe calls for because my family likes the texture better. The marshmallows made with two packets are creamier and less rubber bandy, less springy,but both are delicious.

Then it’s sugar, water, vanilla, or some other flavoring extract, powdered sugar, and some kind of perhaps other starch as well, like cornstarch to keep the finished marshmallow from sticking and corn syrup. This is not an ingredient I normallystock in my kitchen. It serves the purpose of making sure that the sugar does not recrystallize in the marshmallows.

I have tried making marshmallows with maple syrup instead of corn syrup. They crystallized after a couple of days. And although I adore maple flavor, I preferred regular vanilla marshmallows. But if you want to maple recipe go to King Arthur Baking website. They have one there.

Before we talk about the method to make marshmallows, let’s talk a little bit more about sugar because the corn syrup sort of brought that up.

Now, a sugar primmer, for those of you who don’t remember, sugar comes in six forms, three disaccharides di meaning two. So two sugar molecules hooked together. Those are sucrose, lactose and maltose, and three monosaccharides, glucose, fructose and galactose.

In your digestive tract, all three disaccharides are broken down into monosaccharides so they can be absorbed.

Just a side note. If you’re lactose-intolerant, your body does not produce enough of the enzyme lactase to break down all the lactose you eat, and the lactose remains in your gut. When it reaches the large intestine, the bacteria, there have a carbohydrate party, but it’s not much fun for you as gas, bloating, cramping, diarrhea may result.

Okay back to sugar. White granulated table sugar is sucrose. Sucrose is made up of one molecule of fructose and one molecule of glucose. Corn syrup is a hundred percent glucose, which is also blood sugar. High fructose corn syrup has some of the glucose enzymatically changed into fructose depending how much of the glucose is turned into fructose. It might be 42%, 55% or 90% fructose notice that both the 42% and the 55% high-fructose corn syrup are pretty close to table sugar which is 50% fructose. But in the karo syrup that this recipe calls for it is corn syrup, which is a hundred percent glucose.

Now let’s take another step back. You can not live without sugar. Your body needs to keep your blood sugar within certain ranges for you to live. However, you do not need to eat sugar as your body can convert the carbohydrate that you eat into sugar.

You also eat naturally occurring sugar when you eat fruit, but fruit comes with vitamins, minerals, fiber, and many phytochemicals that promote health.

When you eat sugar, you just get sugar and too much of it will either deprive you of all the nutrients you need for good health, because you’ve eaten sugar instead of more nutrient dense foods, or it can contribute to obesity by supplying extra calories on top of nutrient dense foods.

So homemade marshmallows are an occasional treat, but they are so good. This is one of the ways I would gladly eat my sugar allowance.

Let’s talk a little bit about how to make marshmallows

First, put your two packets or three of gelatin in the bowl of your stand mixer. add a half cup of cool water and mix to dissolve. I use the same heat resistant spatula that I’m going to use to dissolve the sugar and scrape the pan after boiling the water and sugar. I use that to mix up my water and gelatin. The gelatin will firm up as you prepare the other ingredients. That’s why you do it first, stir it once or twice, and then rinse the spatula.  Place, the whisk attachment on your stand mixer.

Now, place the sugar (and all the amounts as normal are on foodsensitivitykitchen.com/episode zero two, two – okay? And pictures and everything.) So you’re going to place your sugar, the other half a cup of water and corn syrup in heavy pan,over medium heat.

And by the way, the new packages, the new bottles of corn syrup have a one cup measure on them. And this recipe calls for one cup of corn syrup. You don’t even need to put it in a measuring cup or on a scale or anything. You can just pour it right into the pan using the one cup measure.

And one bottle makes two recipes of marshmallows because it’s two cups of corn syrup. So just a little tip there. I love that the little window in the new one cup measure on the jar, bottle, whatever you call it of corn syrup. Okay?

So back to this, we’ve put sugar, one half cup of water, a cup of corn syrup and a heavy pan over medium heat. And you’re going to stir it until the sugar dissolves, being careful not to get sugar on the sides of the pan. If you do just rinse it off with a little extra water or a pastry brush, dipped in water.

You’re going to cook until the sugar mixture reaches 240 degrees. Check it several times if your thermometer doesn’t stay suspended in the pan like mine doesn’t. Use your long silicone oven mitts on your hands when you check the temperatur if you’re using a regular instant read thermometer.

At this point when your sugar mixture reaches 240 degrees, turn off the heat. Turn your stand mixer on to the low setting. You’re going to very slowly and carefully pour this boiling sugar mixture between the side of the bowl and the beater while wearing the silicone oven mitts, scrape the pan and turn the mixer to high.

Beat the marshmallows until they turn white and become stiffer.They’ll be warm, but no longer hot – about 95 degrees. So about the same temperatures, your hands if your hands are body temperature and they’re not real cold. It’ll take about five to eight minutes to get to this point.

Add the vanilla near the end of the mixing. Now, because I only use two packets of gelatin. My marshmallows neverformed what would be stiff peaks if I were using eggs,but rather stay at the stop soft peak stage. If you use three packets of gelatin, yours may form stiff peaks.

Quickly transfer the mixture to the prepared pan and spread it if necessary. With two packets, normally it’ll just spread itself, but depends. Sometimes you have to help it a little bit. Let it stand for several hours or overnight for the marshmallows to firm up.

Now comes the hardest part of this recipe, which is cutting the marshmallows. Wear an apron or old clothes as I usually end up with powdered sugar somewhere! Carefully, pull both sides of the parchment to release the marshmallows.

Take the whole slab of marshmallows out of the pan and put them on a cutting board, sprinkled liberally with a mixture of powdered sugar and corn starch and peel off the parchment paper.

AsI cut a strip of marshmallows, I turn the strip so that it’s coated in powdered sugar to prevent sticking, and I shake off any excess and then cut it into squares. Add more powdered sugar to your cutting board as necessary.

Store your marshmallows in an airtight container with parchment between layers and space between adjacent marshmallows, otherwise you end up with a giant marshmallow.

If you really want the crunch of peeps, sprinkle colored sugar on the marshmallows as they cool. If you want different flavors, swap out the vanilla extract for peppermint or other flavors.

Homemade marshmallows are an occasional treat, but they are so good. This is one of the ways I gladly eat my sugar allowance.

You may have someone that would appreciate a special treat with no added flavors or colors. These are naturally free of almost all allergens, except corn.

Enjoy! And celebrate that Jesus rose from the dead and that we can have eternal life in him because he died and rose. Our sins are forgiven and we can live forever with him. Now that is good news worth celebrating!! Alleulia! Happy Easter to those of you who celebrate.

Keep Cooking to Enable Those You Love to Flourish. Have a great day. Thanks for joining me. Bye-bye.

Here is a link to the original King Arthur Baking Company recipe.

An article about corn syrup in making candies by David Lebovitz, Why and When to Use (or Not Use) Corn Syrup