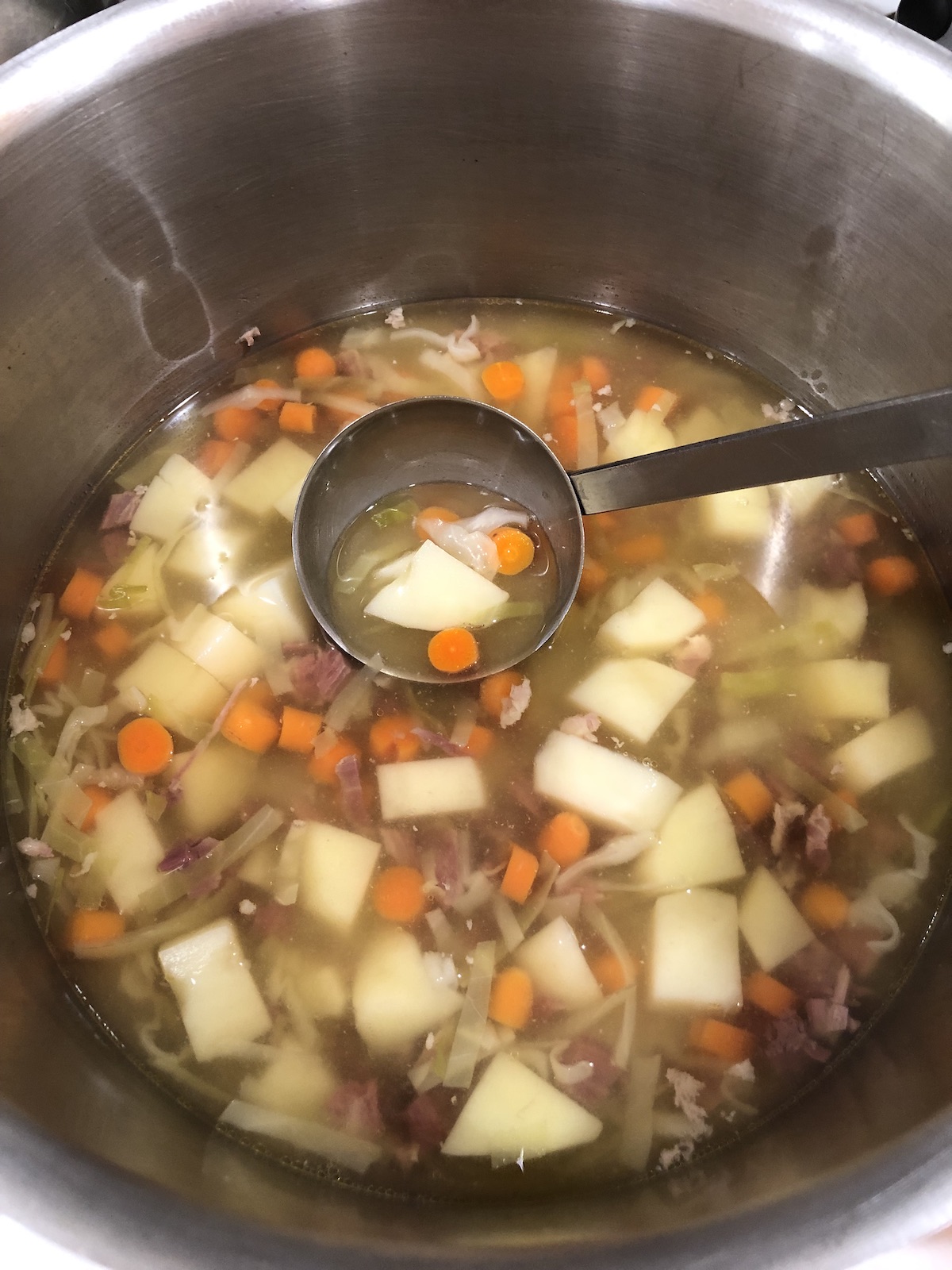 Welcome to The Sensitive Kitchen, where home cooks are inspired to “Cook to Enable Those You Love to Flourish.” I’m Cindy Sullivan, registered dietitian, passionate nutrition educator, and accomplished home cook.

Whether you’re changing how you cook for food sensitivities, allergies, intolerances, or just trying to eat healthier on a budget, you’re in the right place. Most episodes, I will share favorite recipes, as well as modification tips and nutrition benefits. Occasionally, I’ll have a guest or special episode like modifying holiday favorites. My favorite foods? They’re raspberries and homemade chocolate chip cookies. My latest cooking project was long-fermented sourdough bread.

Today I have a very simple recipe for you, for March and specifically for St. Patrick’s day leftovers, or anytime you’re eating corned beef. I am currently busy testing vegan Japanese milk bread for the next episode, but more on that later. It has been an overwhelming success, both at my house and in my testing group. This episode, 43, on The Sensitive Kitchen podcast, corned beef soup, an amazing stock that requires no extra work, no extra time, and no extra money. Sounds too good to be true doesn’t it? Let’s talk about this corned beef soup and this stock.

As you’ve probably guessed by now, I love soup. The past few months, I have used some purchased broth and stock to make soup, and it has made it so much faster to make soup. I haven’t been able to do that in years and years, I will still continue to make stock. I grew up with homemade chicken stock or broth, but I have to admit sometimes it’s time-consuming. Making the stock is not so bad, but taking all the chicken off the bones and then finding something to do with the less than tasty chicken was challenging. Over the years, I’ve discovered several recipes my family likes to make with “soup chicken.” Today’s recipe is one of my favorites, both for taste, and because it saves me both time and money.

St. Patrick’s day is coming. It’s only a little over a week away. Do you eat corned beef or does your grocery store have it available and so now you remember that you like it and you eat it, even if you don’t eat it on St. Patrick’s day? We make what I grew up calling boil dinner, corned beef, boiled for several hours. Then carrots, potatoes and onion, and cabbage were added to the pot and boiled until the vegetables were tender, served with mustard or horseradish, or ketchup and Americanized soda bread that I talked about last year. So it’s on my website and we were happy Irish for a day people. Now I live with a real Irishman and boil dinner still happens.

The answer to both was a resounding “yes.” Corned beef soup is one of my favorites, but I’ve also made the broth or stock to make several other soups like lentil and black bean. And best of all, you don’t need to do any extra work, just strain the cooking liquid and you’re ready to cook it or freeze it for later. It is a money saver because you don’t have to buy anything if you’re already making corned beef, or if it will convince you to spend the money to make your once-a-year corned beef, you can get extra meals out of it and extra stock out of it.

So, you’re going to rinse your corned beef and remove the spices clinging to the outside. If you have used a Trader Joe’s corned beef, it is hard to remove how many mustard seeds from that fat layer. This is the hardest part of the whole recipe. Keep rinsing and use your hand to dislodge most of them. Place the rinsed corn beef in a large soup pot in your refrigerator covered with water, or if you live in the north and it’s going to be below 40 degrees, maybe in your garage.

A food safety note here, remember that you want to sterilize your sink after each time you pour out the water since raw meat has been sitting in it, and this is the second most time-consuming part of the recipe. Now, when you’re ready to cook it, change your water one last time. I personally use my 12 court stockpot, and it’s usually filled about two-thirds full of corned beef and water. Trader Joe’s usually sells about three-pound corned beefs, which is enough for us because we aren’t serving a huge crowd, and I want lots of room to add vegetables, so I do use my 12 court soup pot.

After my corned beef has simmered for two to three hours, I add my carrots, potatoes, both of them are quartered approximately, and about half of a small cabbage cut into wedges, or more if your family eats more cabbage, sometimes an onion or a shallot. You’re going to cook for about another half an hour until your vegetables are tender. During this time, I usually remove the meat and place it on a plate while the vegetables cook. You can leave it in if you prefer, but when your vegetables are tender, use a large slotted spoon to remove them from the cooking liquid, slice the meat across the grain and enjoy your corned beef dinner.

I usually package mine in three to four cup portions and freeze it. I also try to freeze small packages of corned beef to use to flavor the soup about six ounces or so cut really small, or sometimes I freeze slices and cut them when I’m ready to make soup. That’s the hard part is trying to sneak out the corned beef before everybody eats it off. So what do I do when I’m ready to make soup? I use about eight cups of corned beef breath, two to three carrots, and two to three all-purpose potatoes. About a cup of cabbage, finely sliced, and you can use more if you want, I like a little less, and about six ounces of corned beef. When I get started, if my broth has been in the freezer, I throw it in my soup pot and turn on the heat, cover it, while I slice and peel my vegetables. The broth thaws, I add my vegetables.

While they cook, I cut my corned beef into very small pieces, and they’re going to need to cook for about 15 or 20 minutes, maybe a little bit more depending on how long it takes your soup to come to a boil and then turn it down to a simmer and cover it. If you have lots of corned beef, you can cut larger pieces, but we never save enough, and I like a little piece of corned beef in most bites of soup. Cook until your vegetables are tender, add the corned beef, and heat until piping hot. Enjoy. This is a light soup. It’s really not a main course soup, unless you want to add lots and lots of corned beef, and we never have a load leftover. So a lot of times we’ll serve it with cheese and crackers or other substantial sides. It will be great paired with quick white beans and tomatoes.

The soup serves about eight, which is about a cup and a half per serving. It has about a hundred calories,10 grams of carbohydrate, lots of potassium and lots of beta carotene, and about two grams of fiber. When you look at the recipe on my blog, FoodSensitivityKitchen.com/episode043, the sodium content will be off. I had to use a canned lower-sodium beef broth because I’ve not sent my corn beef broth to a lab to be analyzed. So be assured that you’ve reduced the sodium a lot, but it’s still not as super low sodium soup.

The next episode in two weeks will be a tutorial on vegan Japanese milk bread. As I said, we’ve been testing it and it is absolutely delicious. So far, I’ve made it with pistachio milk and flax eggs. I have made an exquisite cinnamon swirl loaf, almond milk, cashew milk, aquafaba are next, then comes adding some whole grains.

If you are able to eat wheat, stay tuned. It is a winner, even if it’s not an everyday bread. Keep Cooking to Enable Those You Love to Flourish. Have a great day. Bye-bye.